A year ago, the boyfriend of a dear friend asked me to draft his bio for the website of the company where he’d started working. The write up couldn’t read like a narrative version of his resume; it was supposed to be quirky and convey his sense of humor and interests as well as get his qualifications across.

I spent about 45 minutes preparing the piece, which he (and his boss) loved.

“Hey,” he said. “I know a lot of guys who could use your help writing their online dating profiles. You should really look into doing this as a job.”

I dismissed his suggestion. Surely he exaggerated. How hard could it be to write an online dating profile?

Now that I swim in the online dating pool, I’m constantly struck by the poor writing I encounter. Online daters, you have one chance to make an impression. And maybe you hit it out of the ballpark with your photo; a picture does say a thousand words. But you must follow up your photo with at least a few sentences to attract the attention of potential suitors. Make their click on your profile count.

I don’t care how attractive your picture, if you spell a word wrong, I’m done. Double check your/you’re, its/it’s and their/they’re/there. Don’t randomly capitalize Words. In other words, don’t say you’re (not your) looking for a great Lady. Strike a playful, witty or friendly tone; your (not you’re) online profile is not the forum to bash your previous bad dating experience and shouldn’t read like a LinkedIn summary. Please refrain from writing words as if they end in in’ – for example, chillin’, hangin’, relaxin’ or my biggest pet peeve, chillaxin’. If you decide to go dirty, at least get lie vs. lay correct.

Readers, if you know a poor soul in desperate need of a modern day Cyrano de Bergerac, inquire within. The Internet may not have secured me a ton of dates, but I don’t fault my way with words. 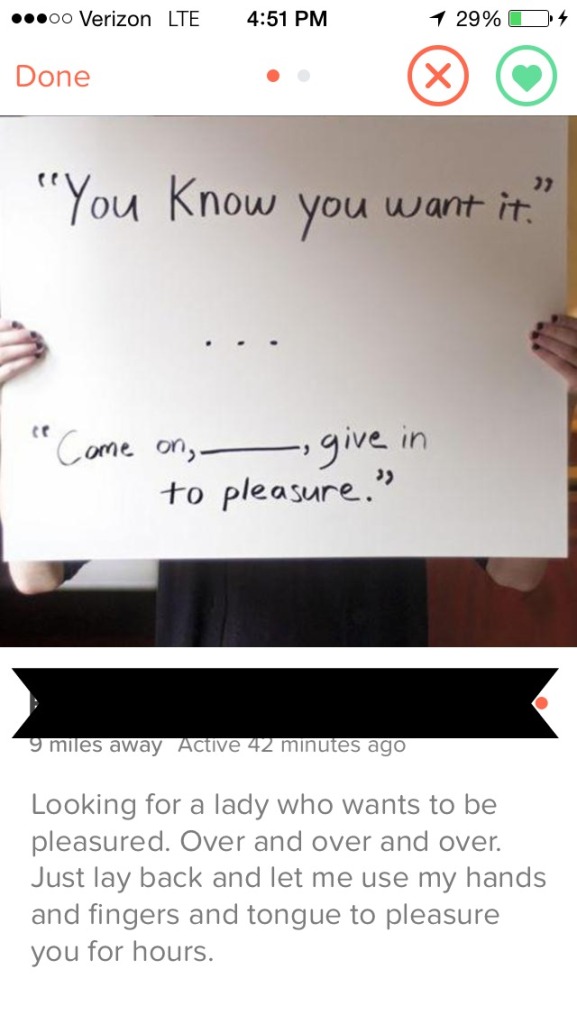 I have to admit that one of my favorite new pastimes is taking screenshots of potential matches that come across my online dating feed and sharing them with girlfriends. I do this partly to mock but mostly to question: why on earth would a person choose this particular photo as the critical first impression shot?

Perhaps if a friend with a discerning eye had been consulted, this confusion never would have arose, and Ben and I would be perfectly paired. A number of group shots make it into people’s dating profiles, rendering the subject of the profile highly unidentifiable.

One of my favorite photos is the non-photo. I suppose I should not judge a book by its cover, but we are talking about the internet. It is more honest than offering a doctored or dated photo, but please, no photo draws an automatic decline from me.

It boggles my mind how many deletable photos are posted. Like when you drop the phone as you are about to take a picture and half your face ends up cut off or the image turns out blurry. I didn’t crop this photo, readers. I can only presume this dude does not have friends to tell him he’s not putting his best side forward.

The gentleman below loves a good rugby match, and I applaud him for being upfront about his passion for the brutal sport. But he could have gotten his point across without leading with a bloody picture. If you are related to this man, please tell him to save this photo for the third date.

Your friends can also be there to help stop you from posting underwear photos and dark/upside side down photos. A consultation might result in the straightening of your headphones or someone near and dear telling you it’s a very bad idea to grab your junk for a photo.

And last but not least, a true friend would never let you post this pronouncement. I mean geez… leave a little to the imagination, please. 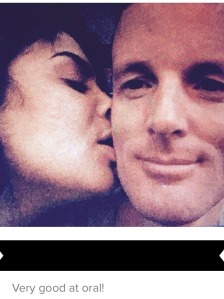 We can’t all have photographer friends to make us look gorgeous, but with today’s technology, it doesn’t take much effort to look good. If you’re unsure of a photo, don’t post it. And whatever you do, don’t forget to include the witty banter.

I tend to come to Internet trends late. I initially rejected Facebook and more recently, divorced the site. I never followed a blog until I after I started my own. I avoided Twitter as long as I could, and I’m a self-diagnosed Instagram stalker, just posting enough photos to be legit but preferring to ogle at other people’s meals, outfits and sunsets.

“Try online dating,” my friends pushed. Love? Like I’m going to find that on the World Wide Web. But they coaxed, and I tested the waters.

Match.com was a disaster. Not only did I go on zero dates, but their algorithm is broken because I kept getting paired with men whose profiles declared my single biggest deal breaker: wants kids, definitely. But the final subscription-canceling straw came when one of my daily matches, the 10-12 carefully selected true love potentials I was thoughtfully sent everyday, was a 62-year old school bus driver.

“Hinge is the way to go,” a twentysomething told me. It sounded kind of dirty, but I gave it a go. I met a guy, respectable enough. Hinging on the boring side. We dabbled in dating before I admitted to myself we had no spark.

Of course, everyone brings up Tinder. But why would I sign up for the hook up site? That’s certainly not what I want, and if it were, I’d find other ways to meet eligible men.

“Tinder is different for people in their 40s,” I was assured. “I know a woman who met her boyfriend on Tinder,” one guy friend told me.

Fueled by wine and boredom, the other day, I joined. It literally took me all of 30 seconds to set up my account. Unlike Match and other dating sites, there is no long profile page to fill out. Just add some pictures and a 400-character description and voila. Immediately, I had hundreds of “matches” to swipe right or left. It took time to get the hang of it. I sadly left swiped the man pictured in front of his extensive wine cellar and my friend accidentally right swiped someone unacceptable who instantly became a match, leading to scrambling and un-matching.

I don’t think it’s 100 percent true that 40-somethings use Tinder for “real” dating, as evidenced by some of the profile photos I’ve seen. Readers, Nude Photo Exhibit A:

The lack of a character description is telling. I’ve left swiped some handsome guys because they wrote nothing about themselves and I just don’t go for illiterate men. Nor am I interested in a “poly” relationship or to be an out-of-towner’s fling. I mean, it’s one thing if we meet at happy hour at Proof, but quite another if I have to prearrange sex on my iPhone.

I get it… you have to kiss a lot of frogs. And then maybe you find a prince. And he owns a hot tub.