Yesterday, at the prompting of the youngest of my hosts, we went around the table and each shared three things we are thankful for. I gave thanks for friends who feel like family; kids who are funny, smart and thoughtful; and the opportunity to spend the last year exploring my creative interests.

What I didn’t mention for the sake of time and a desire to eat the feast before us: the ability to put words to paper to craft a story, as well as all the tools (computers, writing implements, time) that go along with that effort. Friends and a professional network who are willing to read and critique that writing.

The opportunity to take yoga teacher training under the guidance and wisdom of some wonderful yogis and with my inspiring classmates, all of whom share so much of themselves and help me improve my practice.

Hearth. Home. Health. Family. Health Insurance. Cats. A wine collection that would sustain me and a small army through snowmaggendon 2.0. A safe school for my kids. A paid-off car that gets me where I need to be and economizes fuel while doing it. Accidents that turn into serendipity. Books.

I’m trying to get better at being grateful everyday, not just when the calendar reminds me to. The pause we all took on Thanksgiving was too quickly replaced by the frenzy of Black Friday. As we approach the Christmas season, the challenge will be to not lose sight of what really matters. For me, that means not setting my alarm to score the best deal at my favorite shopping destination (you know who you are and I love you) but keeping with me today the spirit I embraced yesterday. 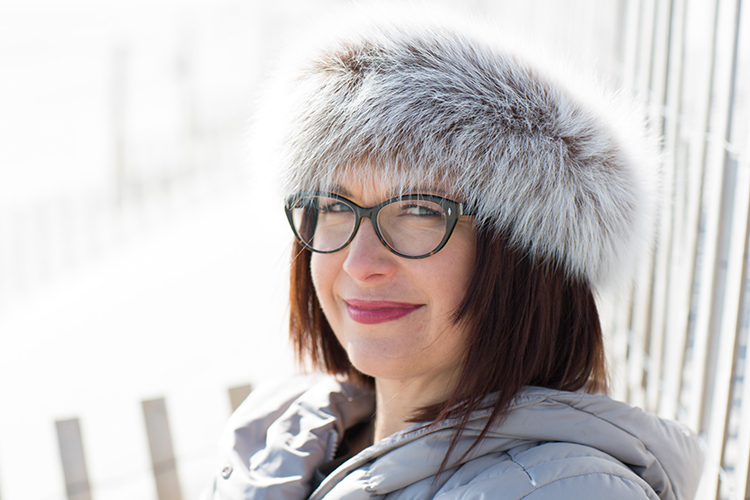 A few of you have asked for the story behind my Dr. Zhivago inspired profile photos.

Well, it was a cold and blustery day on the Jersey Shore. I had arrived the afternoon before, hair looking good and perfect outfit packed. But torrential rains delayed the photo shoot, so Chris Meck and I opted instead to eat, drink and be merry, as two almost life long friends spending a night away from their kids are apt to do.

“Tomorrow will be clear,” she promised me, refilling my glass.

As you can see, it was indeed clear outside, but the part of the forecast lost on me in our planning was the wind chill of twenty degrees. So much for my new sweater and perfectly flat ironed hair.

With both form and function in mind, we added the fur headband to both keep my temples warm and hold my hair in place.

Part of my drive was to walk away with a book jacket author blurb photo, but Chris says we can try again later. In the meantime, enjoy these photos from the sandy tundra. You’re going to be seeing them until spring.

All I wanted my first 12 years of life was a baby sister. Granted I had my brother Nathan, a virtual mini me who didn’t eat unless I was hungry and who hung on my every word and command. But he grew tired of my dressing him up in my clothes. In an assertion of independence, he got a haircut. I could no longer play with his golden locks. My brother refused to pretend he was my sister.

Then when I was 12 years old my mom got pregnant. This was it! The baby sister I’d longed for. I was sure she was carrying a girl. Life would not be so cruel as to saddle me with a second brother.

I took Lamaze classes with my mom, intent on being present in the delivery room. I wanted to buy pink baby linens and clothes but Mom would only consent to gender neutral yellow and green. It was a torturous nine months waiting for her to arrive.

When my mom went into labor, I was in bed with a fever of 101. There was no way the doctor was going to let me greet my baby sister into the world. Those many hours when my mom was at the hospital, in the dark days before text, cell phones the Internet, my brother and I waited patiently. Time dragged. Which flavor sibling would we get?

Alas, I didn’t get what I wanted. Really? Another boy? But then my mom brought him home, and he was pretty darn cute. I quickly forgave him his Y chromosome. Early on he had a killer sense of humor. We gave him a nickname I won’t publicize. He was a favorite among my friends, making a cameo appearance in my Senior project, a film on the Children’s Crusade. Did I give him the acting bug? Maybe.

He followed his dream, majored in drama and after college made a name for himself in the Seattle theater scene. Once he mastered the stage, he picked up the banjo and a few months later was touring with an alt-rock band. He forges iron. (I have a nice fire tool to prove it.) He recently discovered a hidden talent: math. My little brother is a calculus genius. It didn’t surprise me. He excels at everything he tries.

I don’t get to see our family renaissance man nearly often enough and mostly catch glimpses of his life on Facebook. (His updates are hilarious.) I’m only disappointed that he doesn’t live closer. I wish Jack and Collin had more regular interactions with their sarcastic, smart, sensitive Uncle Banty, who just completed another turn around the sun.