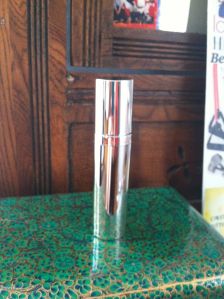 I’m a sucker for the makeup counter, which is why back in April, I got talked into trading my beloved Laura Mercier Tinted Moisturizer for le Metier de Beaute Peau Vierge, which unfortunately for my budget, rings up at three times the price.

But it is so worth it.

Only a small amount is needed for as flawless skin as one might get when one has, well, flaws. I still use Laura Mercier for weekends and when I need a reapplication, but I have become a huge fan of the Peau Vierge.

My only complaint is that it comes in the kind of vessel that doesn’t reveal it’s about to run out until it’s actually out. And last week, I ran out.

On Saturday when Emily was in town, we were in Friendship Heights, and I asked her if we could pop into Neiman Marcus so I could pick up a replacement bottle. We walked in, and I immediately saw the Metier de Beaute make up artist/rep who initially sold me the product. I was a little taken aback that he was so dismissive when I told him what I was there for. Instead of helping me himself, he beckoned to another counter for a sales associate. After several minutes, his makeup minion came over and when I told her what I wanted, she broke the sad news that they were out of my shade. Mr. Metier Makeup Artist immediately chimed in.

Mr. Metier Makeup Artist: Actually, it’s the manufacturer who is out of that shade so you can’t get it at all.

Me: For how long?

I turned to walk away.

Mr. Metier Makeup Artist: You should try a shade darker. I’m wearing the next shade and I have a lighter complexion than you.

Now maybe this guy doesn’t remember how the first time I was there, he gushed that 01 was the perfect shade for me. So I protested that I’m an 01 not an 02. He told me again that the manufacturer was completely sold out and I’d have to live without the product for at least three weeks.

Except when I got home, I ordered it from Nordstrom.

A message to Mr. Metier Makeup Artist: I know you want to make a sale but the thing is, don’t lie to me. Tell me your store is out, not the world. Be nice to me. Apologize profusely. Offer to apply some lipstick. Give me a free sample. If you had done any of those things, I probably would have used the Laura Mercier product I still have until you could get me Peau Vierge. But you screwed up. The lesson for you? Don’t try to sell me the wrong shade and don’t tell me it’s the manufacturer who is out. Now, I’m not going to buy makeup from you again. I’m sure it won’t put a dent in your sales, but you won’t have the pleasure of my company in a makeover chair, drinking in all your recommendations.