I’m taking a break from the blogging hiatus to say, wow, the Red Sox are World Series champions once again.

I don’t mean to gloat. If Facebook is any meter, I realize many of you are “sick” of the Red Sox winning “all the time.” I get it. Three titles in ten years is not too shabby. But it’s still hard to undo decades of suffering, passed from generation to generation of New Englanders. I recall a conversation 16 years ago when my friends Amy and Thom announced they were pregnant, and Thom said, “I want a girl, but I won’t get one because my teams never win.” (As a matter of fact, they did  have a girl.) I share this example to illustrate  how New Englanders think. Three World Series titles will help in our collective recovery but you can’t just shed overnight a mentality built on a foundation of disappointment after disappointment.

With that said, on my drive in to work this morning I thought to myself, I just have to accept it. We fully put to rest any lingering impacts of the Curse of the Bambino with our first World Series clinch in Boston since 1918. We are the 21st century’s answer to the decade in the 20th century when the Sox won titles in 1912, 1915, 1916, and 1918. Maybe it isn’t a jink to say “I think my team is going to win tonight.” Would the outcome of last night’s game been any different if I had gone to bed in the 7th inning? Worn a different color bra? Gone to the game in person?

Of course the answer is no, but if 80 years from now, the Sox are in a drought rivaled only by the one we endured until 2004, I take full responsibility. 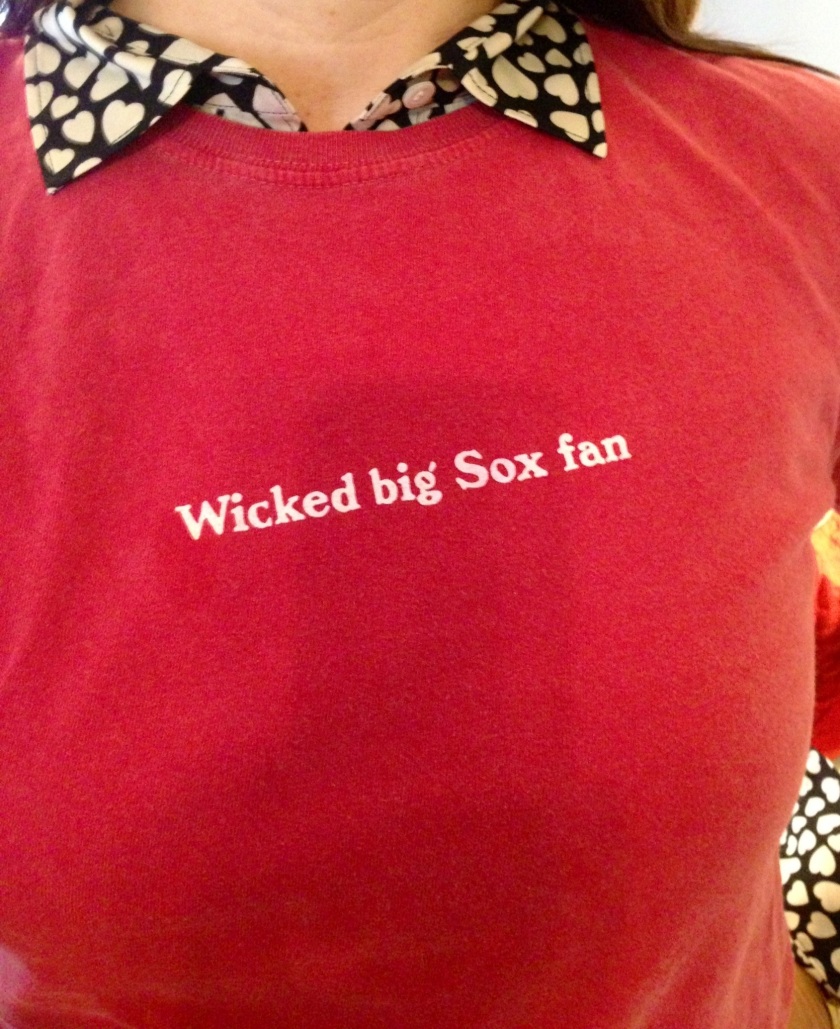 When your team is in the playoffs, you get to incorporate your lucky shirt into your outfit.

I used to be a glass half full type of person.

Then in 1986 I developed the passionate fatalism shared by my adopted New England brethren when the Boston Red Sox tragically lost the World Series.

And since then, I’ve had an “x thing I want to happen will never happen because my teams never win” outlook.

Absurd because my teams DO win. I’ve now witnessed not one but two Red Sox World Series titles. And I don’t even want to count the combined 49ers-Pats Super Bowl victories over my lifetime. (On the other hand, I definitely take the blame for Michelle Kwan never winning a gold medal.)

My cat ran away. (“But she came back and you got to experience the heartwarming response from your community in the process,” Nancy reminded me.)

My other cat died. (“She was old and lived a good life, and you had many happy years together.”)

I got a flat tire. The Boston Marathon bombing happened. Congress is never going to pass climate legislation. (When I’m on a roll, I’m on a roll.) My washing machine broke. I cracked my iPad. Got concussed. Not to mention the countless other mini Chelsea disasters that put dents in my spirit.

Nancy has this great way of turning the energy around in a cloudy situation. She takes a negative and manages to find the positive. And she has challenged me to try it.

It’s going to take some practice. I might not be very good at first, and I’m sure I won’t be consistent. But I think I will give her methods a try. With a glass half full of wine to help. 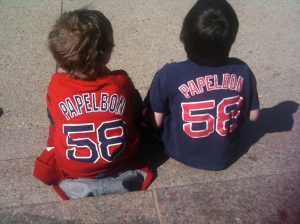 Time to move the Red Sox shirts out of my drawer and really commit to football season. At least in the modern era of Red Sox choke lore, I can rest knowing that when I die, I lived to see the Red Sox win the World Series title. Twice. Generations of New Englanders died never experiencing that sweet moment when the last out is executed and the realization sinks in that you are world champions (well, North American champions). Still, it was hard to have this conversation when Jack woke up (uncharacteristically) at 6:15 this morning:

Jack (voice too enthusiastic for pre-alarm clock): Mommy, did the Red Sox win?

Me (pulling covers over head): No.

Jack (voice laced with a familiar disappointment): But I thought this was finally the season that I was going to see the Red Sox make it to the World Series.

Jack has lived through the same two World Series titles that I have, but in 2004 he was three and cared more about Tonka trucks. Even in 2007 he was only six and while he was watching games, I think the season takes on new meaning once you start playing little league, learn to keep score, and can identify players. But now in 2011, the poor baby has no idea that he has just joined the ranks of many an anguished sports fan. Yeah, it burns.

Now that baseball season is over for me, maybe the weather will finally stop acting like it’s August and remember it’s fall. I have a hard time making my very special warm cheesy bean dip that I’m known for by legions of football fans in multiple states when the temperatures are hovering around 84 degrees with 96% humidity.

I love baseball – and for an OCD person like myself I mean I love the ritual of baseball. (I make Nomar Garciaparra look well adjusted.) But I really enjoy the mechanics of football better. I prefer the faster pace. I prefer the presence of a clock. I prefer the element of strategy. And I certainly prefer Tom Brady to any baseball player to come along since Steve Sax (who played in the days before it was de rigueur to resemble a cave man under your batting helmet).

Football season. Fewer than 20 regular season games. Your teams plays once a week; there’s none of the being neurotic for 160+ days a year baseball inflicts. When people say about baseball that the first few weeks of the season don’t count, they’re wrong. If the Sox had won one more game in April, our guys would be on their way to Florida for a one-game playoff instead of to Boston to pack up for the winter.

So the Pats might have rolled over to the Bills this past weekend. Or maybe the Bills are for real. My original favorite football team is back on the rise, though I can’t look at a 49ers uniform without sliding into a reverie of the Joe Montana-Steve Young eras. I’m in one of those “easy” draft-free fantasy leagues where you just make your picks on the winners each week. This weekend will be comfortable football weather in DC. There’s hope for an exciting season ahead. Who needs baseball?

At some point in the doldrums of winter, I’ll be longing to hear an umpire call, “play ball” but for now I’m happy to instead be focused on false starts, two-point conversions and roughing the passer calls. Daydreaming, of course, about roughing my own favorite passer. I’m sure Gisele won’t mind.